What Is An Industrial Touch Screen And What Is Its Operating Principle?

Use your finger or other objects to touch and touch the touch screen installed on the surface of the display during work, and then the system locates and selects the information input according to the icon or menu position touched by the finger. So we can understand that a new product will appear when the touch screen is installed on an ordinary industrial display, that is, an industrial Touch Monitor!

The Industrial Touch Screen Monitor is an intelligent interface that connects people and machines through a touch industrial display. It is an intelligent operation display terminal that replaces traditional control buttons and indicator lights. It can be used to set parameters, display data, monitor device status, and depict automated control processes in the form of curves/animations. It is more convenient, faster and more expressive, and can be simplified to the PLC control program. The powerful touch screen creates a friendly man-machine interface. As a special computer peripheral, the touch screen is currently the simplest, convenient and natural way of human-computer interaction. It gives multimedia a new look and is a very attractive new multimedia interactive device. 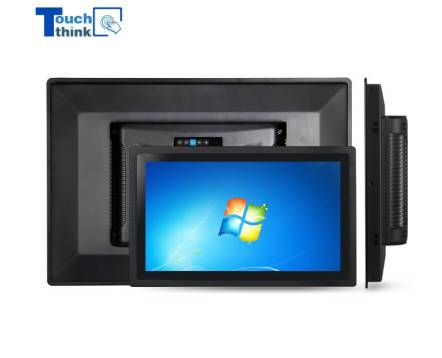 Operation principle of Touch Screen Monitors: touch screen system generally includes two parts: touch screen controller and touch detection device. Among them, the main function of the touch screen controller is to receive touch information from the touchpoint detection device, convert it into contact coordinates, and then send it to the CPU, it can also receive commands from the CPU and execute it: touch detection devices are generally installed At the front of the display, the main function is to detect the user's touch position and transmit it to the touch screen control card. The industrial touch screen has strong flexibility, can increase or increase the function module according to the design requirements, and has strong expansibility, can meet the complex process control process, and can even communicate directly with the PLC through the network system, which greatly facilitates the processing and transmission of control data, Reducing the amount of maintenance.

PreviousWhat Are The Characteristics Of Industrial Touch Displays?
NextCommon Industrial Computer Faults and How to Solve Them