How To Match The Touch Screen Of An Industrial Tablet?

The touch screen is a touch panel, and is generally combined with a liquid crystal display to form a Touch Screen Monitor. Industrial tablet computers are industrial computers with touch display devices. Commonly used touch screens include resistive screens, capacitive screens, infrared screens, surface acoustic wave screens, and the like.

The screen of the resistive screen is a multi-layer composite film consisting of a layer of glass or plexiglass as the base layer, and the surface is coated with a transparent conductive layer (ITO film), which is covered with an outer surface that is hardened, smooth and scratch-resistant. Plastic layer. Its inner surface is also coated with a layer of ITO with a number of fine transparent isolation points separating the two conductive layers. When the screen is touched, two layers of ITO come into contact, and the resistance changes. The controller calculates the coordinates of the contact point according to the detected resistance change, and then performs corresponding operations according to the coordinates. Therefore, an industrial tablet computer using a resistive screen must be applied to the screen in order to obtain a touch effect. The resistance screen has low requirements on the working environment, and is not afraid of dust, moisture and oil. It can be touched by any object, and has no requirement for temperature and humidity. It is suitable for industrial control. In addition, the resistive screen is a soft screen, and an Industrial Monitor using a resistive screen has a soft feeling when the screen is operated, and too much force or use of a sharp touch may cause scratches on the touch screen. Four-wire resistive touch screen: not afraid of dust, oil and photoelectric interference, fear of scratch is its main defect. Applicable to public places with fixed users, such as industrial control sites, self-service terminals, etc. Five-wire resistive touch screen: excellent sensitivity and transparency, long service life, not afraid of dust, oil and photoelectric interference, suitable for all kinds of public places, especially suitable for sophisticated industrial control sites. 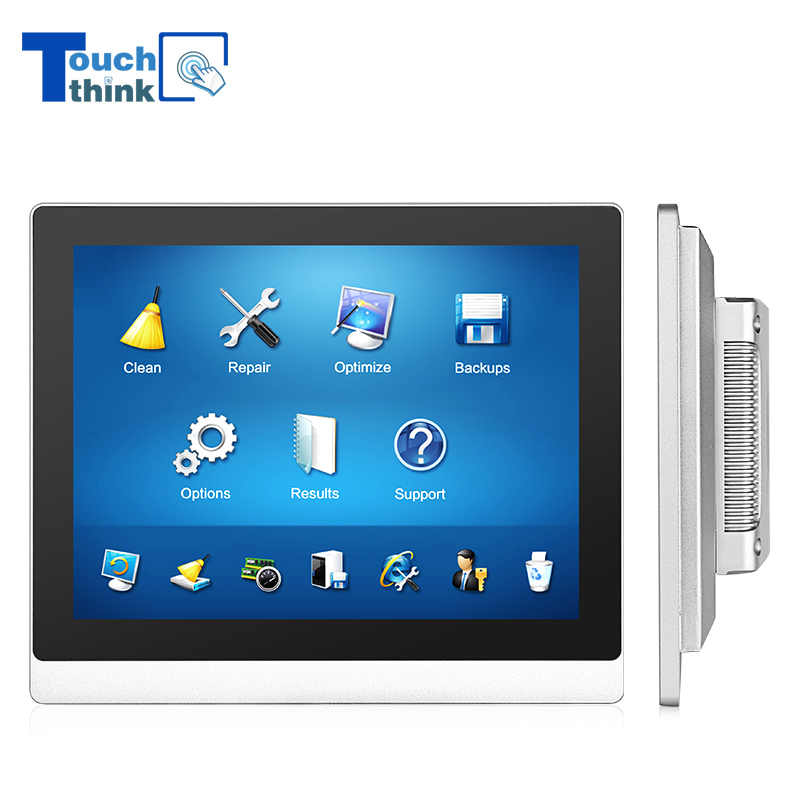 Capacitive screen A four-layer composite glass screen, the inner surface of the glass screen and the interlayer are coated with a layer of ITO, the outermost layer is a thin layer of bauxite glass protective layer, the interlayer ITO coating is used as the working surface, and four corners are drawn. The electrode, the inner layer of ITO is a shielding layer to ensure a good working environment. When the screen of the industrial tablet computer is touched by hand, the human body acts as a pole of the coupling capacitor, and the current is collected from the four corners of the screen to form the other pole of the coupling capacitor, and the coordinates of the touch are obtained by the controller calculating the relative distance of the current to the touch position.

The infrared screen uses an infrared matrix densely packed in the X and Y directions to detect and locate the user's touch. The infrared screen is installed with a circuit board outer frame on the front of the display. The circuit board arranges the infrared transmitting tube and the infrared receiving tube on the four sides of the screen, and one-to-one correspondingly forms an infrared matrix which is horizontally and vertically crossed. When the screen of the industrial tablet is touched, the touch object blocks the two infrared rays passing through the position, so that the position of the touch point on the screen can be judged. Any touch object can change the infrared light on the contact to achieve touch screen operation.

The infrared screen is free from current, voltage and static electricity, is not afraid of pollution, is not easily damaged, and is easy to maintain. Suitable for complex working environments, it can be used in various public places, offices without infrared and strong light interference, and industrial control sites that are not very precise. In addition, since the infrared screen relies on infrared sensing to work, external light changes, such as sunlight or indoor lights, can affect its accuracy. Industrial tablet computers using infrared screens need to consider the high stability and high resolution of the touch screen.

These are just a few touch screens for industrial tablet computers. If you are interested in industrial PCs or touch panels, you can contact us. We are a professional manufacturer of industrial PCs, which can provide a variety of industrial computers including Industrial Touch Panel PC, we will certainly meet your needs.