How to Match the Touch Screen of Industrial Tablet PC?

The screen of the resistive screen is a multi-layer composite film with a layer of glass or plexiglass as the base layer, and the surface is coated with a transparent conductive layer (ITO film). Plastic layer. Its inner surface is also coated with a layer of ITO, and there are many small transparent isolation points between the two conductive layers to separate them. When the screen is touched, the two layers of ITO come into contact, and the resistance changes. The controller calculates the coordinates of the contact point according to the detected resistance change, and then performs corresponding operations according to this coordinate. Therefore, an industrial tablet computer using a resistive screen must apply force to the screen during operation to obtain a touch effect.

Resistive Touch Screen Monitor has low requirements for the working environment. It is not afraid of dust, water vapor and oil pollution. It can be touched by any object. It does not have much requirements on temperature and humidity, which is suitable for industrial control applications. In addition, the resistive screen is a soft screen. An industrial tablet computer using a resistive screen will have a soft feel when operating the screen, and the touch screen may be scratched by using too much force or touching with a sharp tool. 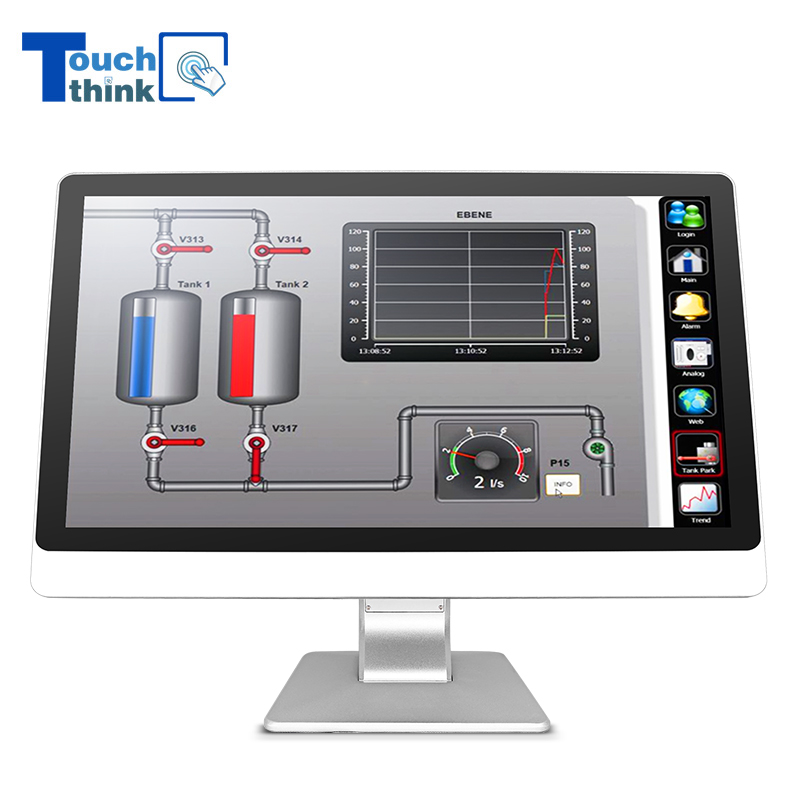 Capacitive Touch Screen Monitor, a four-layer composite glass screen. The inner surface and interlayer of the glass screen are each coated with a layer of ITO. The outermost layer is a thin layer of silica glass protective layer. The interlayer ITO coating is used as the working surface. Four electrodes, the inner layer of ITO is a shielding layer to ensure a good working environment. When touching the screen of an industrial tablet with your hands, the human body acts as one pole of the coupling capacitor, and the current is collected from the four corners of the screen to form the other pole of the coupling capacitor. The controller calculates the relative distance of the current to the touched position to obtain the touch coordinates.

The infrared screen uses a dense infrared matrix in the X and Y directions to detect and locate the user's touch. The infrared screen is equipped with a circuit board frame on the front of the display. The circuit board arranges infrared transmitting tubes and infrared receiving tubes on the four sides of the screen, one by one to form a crosswise infrared matrix. When the screen of an industrial tablet computer is touched, the touched object will block the two infrared rays passing through the position, so the position of the touch point on the screen can be determined. Any touch object can change the infrared on the contact to realize touch screen operation.

The infrared screen is not affected by current, voltage and static electricity, it is not afraid of pollution, it is not easy to be damaged, and it is easy to maintain. Suitable for complex working environment, it can be used in all kinds of public places, offices without infrared and strong light interference, and industrial control sites that require less precision

The surface acoustic wave screen consists of a touch screen, a sound wave generator, a reflector, and a sound wave receiver. The sound wave generator can send a high-frequency sound wave across the surface of the screen. When it touches the screen, the sound waves on the contact point are blocked. Coordinate position, fast response and high accuracy. The surface acoustic wave screen also has a third axis, that is, a pressure axis. By calculating the attenuation at the attenuation of the received signal, the user can obtain the strength of the user's touch on the screen, and has the performance of sensing touch pressure.

Contamination on the surface of the screen will block the wave guide groove on the surface of the touch screen, causing waves to not be transmitted normally, or the waveform to be changed and the controller to be unable to recognize normally, which will affect the normal use of the industrial tablet PC, and users need to clean it regularly.

The above is the way to match the touch screen of industrial tablet computer. Have you learned it?