The Principle, Classification and Application of Industrial Touch Screen

With the advancement of technology, touch screen technology has also experienced a gradual upgrade and development process from low-end to high-end. According to its working principle, it is generally divided into four categories: resistive touch screen, Capacitive Touch Screen, infrared touch screen and surface acoustic wave touch screen.

According to the analysis of the structure, principle and performance characteristics of the touch screen, the applicable occasions of different touch screens are as follows.

Four-wire resistive touch screen: It is not afraid of dust, oil, and photoelectric interference. The main defect is the fear of scratches. It is suitable for public places with fixed users, such as industrial control sites, offices, homes, etc.

Capacitive sensing touch screen: Since the capacitance changes with temperature, humidity or grounding conditions, its stability is poor and it tends to drift. Afraid of electromagnetic field interference and drift, it is not easy to use in industrial control places and places with interference. It can be used for public information query that requires less precision; it needs frequent calibration and positioning.

Infrared induction touch screen: low resolution, but not interfered by current, voltage and static electricity, suitable for some harsh environmental conditions; suitable for all kinds of public places, offices without infrared and strong light interference, and industrial control that does not require very precise on site.

Surface acoustic wave touch screen: pure glass material, best light transmission, long service life, good scratch resistance, suitable for various public places with unknown users. But it is afraid of long-term accumulation of dust and oil contamination, so it is better to use it in a clean environment. Otherwise, regular cleaning services are required. 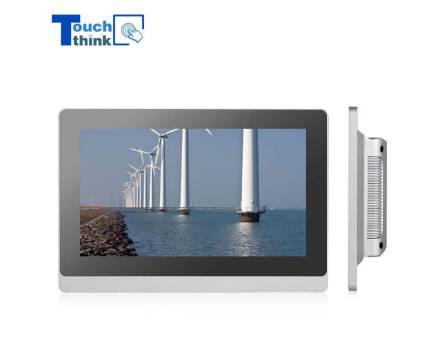 Touch screen technology facilitates people's operation and use of computers, and is a very promising interactive input technology. Countries all over the world generally pay attention to this and invest a lot of manpower and material resources in research and development, and new Touch Screens are constantly emerging.

Touch pen: The touch screen operated by the touch pen is similar to a whiteboard. In addition to the display interface, windows, and icons, the touch pen also has the functions of signing and marking. This kind of touch pen is much more powerful than the earlier light pen that only provides a selection menu.

Touchpad: The touchpad uses pressure-sensitive capacitive touch technology with the largest screen area. It consists of three parts: the bottom layer is the central sensor, which is used to monitor whether the touchpad is touched, and then process the information. The middle layer provides interactive graphics, text, etc., and the outermost layer is the touch surface layer with high intensity Made of plastic materials. When a finger touches the outer surface, this information can be sent to the sensor and logged in within one thousandth of a second. In addition to being compatible with PCs, it also has the characteristics of high brightness, clear images, and easy interaction. Therefore, it has been applied to pointing information query systems (such as electronic bulletin boards) and has received very good results.