Industrial PCs and Tablet PCs: a New Fusion of Form and Function

The continuous development of Industrial PC and tablet computers has enabled users to obtain huge benefits in terms of production capacity, availability, and diagnostic accuracy. The use of wired controls that rely on operator knobs and buttons is turning to wireless Ethernet touch screen equipment. These devices are developing in parallel with wireless devices in the personal consumption field from smart phones to tablets, ensuring that they have similar appearance and user experience in aspects such as intuitive feeling and gesture-based graphical user interface browsing performance. All can be used.

These innovations naturally expand the performance, operating range and versatility of industrial PCs. At the same time, it is more robust and user-friendly for operators of different experience levels. In some designs, it is necessary to be consistent throughout the life cycle of the system—for example, smaller form factors and low power consumption are always important attributes.

Other requirements are relatively new, stemming from the ever-increasing requirements for equipment reliability, the ever-evolving communication standards and protocols, and the emerging security considerations and the app store ecosystem and economic considerations. All this is changing the way the system is customized.

In recent years, one of the most valuable technological advancements is high-performance graphics processing capabilities, including high-definition image resolution, video playback, and 3D graphics.

In the past few years, at the technology platform level, these graphics functions are generally driven by different combinations of CPU and graphics processor unit chipsets, graphics cards, and input/output controllers, but this will cause the system to be too large. With the development of system-on-chip embedded processors in design, the complexity of these processing platforms is gradually reduced and the system size is also significantly reduced. The system-on-chip processor structure integrates low-power CPU, GPU and I/O controller hubs to provide an integrated processing platform, which not only saves system space, but also reduces the number of motherboard layers and power consumption requirements.

The single-chip SOC structure is an advantage for applications that require 3D graphics and video rendering. Using SOC, the onboard CPU and GPU can share system memory resources, making it easier to switch workloads between CPU and GPU, assigning the most suitable computing elements, and suitable for high-speed multimedia processing. In this way, the use of a more streamlined system can complete more powerful processing capabilities, and because of its smaller size, it is easier to arrange and use, thus saving valuable space, supplemented by popular handheld tablet computers, for the scene The mobility provides more convenience.

For any computing device, energy efficiency is a very important feature. The energy efficiency of battery-powered portable devices is often much more accurate than that of devices that directly use the power source and are permanently installed. This is especially true for industrial tablets equipped with high-performance graphics processing.

Low-power, high-performance SOC processor running power is 15W or less, which helps to reduce the power consumption of Industrial Tablet Computers and improve the performance/power ratio, so that smaller batteries can be used and the operating time of field devices can be extended .

Considering the constantly evolving network system in production workshops or similar harsh environments, it is very valuable if industrial PCs and tablet PCs have the ability to adjust power consumption according to performance when the ambient temperature is high. Industrial PCs and tablet computers based on the SOC processing platform can use the function of configurable heat dissipation design. A SOC with a design heat capacity of 15W can be adjusted to 10W, so that it can be maintained at an appropriate power load and heat threshold in a high-temperature operating environment. 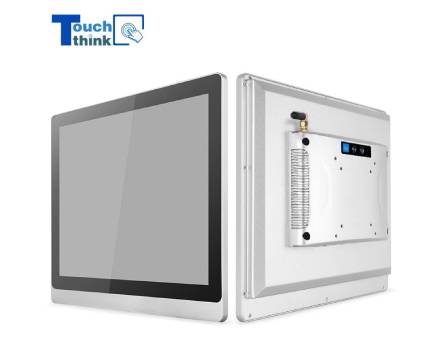 Low power consumption and low heat dissipation are very critical factors in system cooling. If the design is reasonable, fans can not be used in industrial PCs and tablet computers. There are many benefits to not using mechanical fans in the system, including significantly reducing the size of the entire system, helping to ensure high reliability, making moving parts quieter, and reducing the possibility of impact and vibration.

Fanless industrial PCs and tablet computers can also be encapsulated, and the ventless housing makes it possible to have higher reliability in harsh environments. The system memory breakdown caused by shock, vibration and extreme high temperature can be eliminated by the processor-level error correction code, which can locate and correct bit faults.

Regarding processor drive power, cooling and reliability considerations, a clear definition should be given at the beginning of the purchase of industrial PCs and tablet computers, including performance requirements from low-end to high-end, and whether the scalability of the product line supports Wide range of ambient temperature and so on.

Looking to the future, the operating system revolution

For such systems, it is generally an advantage to adapt to multiple interconnection standards, peripheral device interconnection, USB, Bluetooth, 3G, 4G, etc. It is especially important to support flexible PCIe configuration, because it can use other industrial communication protocols and plug-ins. The application of embedded processors supporting 1x4 and 4x1-PCIe bus configurations is very popular in industrial PC systems.

To achieve wireless interconnection in industrial networks, the network may introduce great risks, such as intellectual property theft, manual intervention, viruses and other unauthorized data leakage. Industrial PCs and tablet computers use trusted platform modules to prevent these attacks, ensure secure authorized access and encrypted data in other protective measures. The security processor embedded in the SOC allows it to support security measures, provide native TPM support and hardware acceleration encryption capabilities, ensure the security of the startup function, and reduce software and hardware risks.

Perhaps the most important trend is the increasing interest in the Android operating system. This change is still in the conceptual stage, but its potential benefits are worthy of future exploration and discussion.

Although the Microsoft Windows operating system still occupies the dominant position in the existing industrial PC operating systems, Android represents an opportunity to reduce design and development costs, facilitate the application of the app store method to industrial PC software customization, and achieve functional specialization. Using mainstream mobile operating systems, of course, commercial industrial computer applications that have been debugged and strengthened, system integrators can recommend or select the most suitable app to implement industrial applications, and the final customer-specific solution can be realized by the customer.

Customer customization at the hardware level is often required to be implemented under this new model, especially industrial PCs and Tablet Computers that use special instruments. However, due to the software flexibility brought by the Android system, perhaps one day, upgrading new software tools and functions for industrial PCs and tablet computers can be as easy as installing application software on mobile phones.