The great thing about Touch Screen Displays is that they are very easy to use. The touch screen functions like an invisible keyboard, but only displays the data and button selections the user needs to complete the task. This explains their popularity in equipment ranging from ATMs to store kiosks, hospital operating rooms to complex industrial machinery.

When choosing the best touch screen display for your application, the most important decision will be the type of touch screen technology to use. There are several types, each with its own advantages and disadvantages. We will study the three most common types: 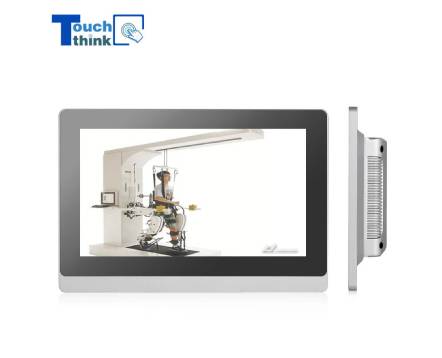 The resistive touch screen display consists of a glass panel covered with a layer of conductive and resistive metal and separated by thin spaces. When the user touches the screen, the two layers will be touched at that point. The computer detects the change in the electric field and calculates the contact point.

Resistive touch screens are usually the most affordable, but they can only provide about 75% to 80% image clarity. Almost any type of object can activate touch, but sharp objects may damage the outer surface. Resistive touch screen panels are not affected by surface dust or water; they are the most commonly used type today.

In capacitive touch screen displays, the layer for storing continuous current is located on top of the glass panel of the display. When a bare finger touches the monitor screen, some charge will be transferred to the user. The decrease in capacitance can be detected and located by the circuit located at each corner. Then, the computer recognizes the contact point.

Capacitive Touch Screens are a durable technology commonly used in kiosks, point-of-sale systems, and industrial machinery. Capacitive touch screens have higher definition and longer durability than resistive touch screens. However, capacitive screens can only be activated with bare fingers

SAW touchscreen monitors use a series of transducers and reflectors on the side of the monitor glass panel to create an invisible ultrasonic mesh on the surface. When the panel is touched, part of the wave is absorbed. The receiving transducer determines the position of the touch point and sends this data to the controller.

The SAW touch screen does not have any layers on the screen, so it can achieve more than 90% image resolution and can display high-detail graphics. They can be activated with fingers, gloved hands or pointed stylus. However, SAW panels are the most expensive of these three, and surface contamination can cause false triggers. The solid contaminants on the screen will form a non-contact area until it is removed.

Other factors to be considered in the selection process include:

Interface: The touch screen panel must communicate with the computer. The most common interface types are RS-232 and USB. The new HID-compliant touch screen display eliminates the need for drivers.

Installation: Options include panel installation, rack installation and independent installation. If it is free-standing, make sure to use a heavy-duty stand specially designed for touch screens. The standard desktop base will tip over.

Environment: The touch screen display with standard, stainless steel and waterproof housing is suitable for a variety of environments.